The book can be ordered in paperback or as an ebook: 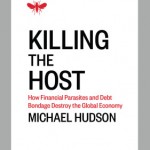 KILLING THE HOST exposes how finance, insurance, and real estate (the FIRE sector) have gained control of the global economy at the expense of industrial capitalism and governments.

The FIRE sector is responsible for today’s economic polarization (the 1% vs. the 99%) via favored tax status that inflates real estate prices while deflating the “real” economy of labor and production.

The Great 2008 Bailout saved the banks but not the economy, and plunged the U.S., Irish, Latvian and Greek economies into debt deflation and austerity.

This book describes how the phenomenon of debt deflation imposes austerity on the U.S. and European economies, siphoning wealth and income upward to the financial sector while impoverishing the middle class.

The Table of Contents is as follows:

Killing the Host: How Financial Parasites and Debt Destroy the Global Economy

Introduction: The Twelve Themes of this Book

The Parasite, the Host, and Control of the Economy’s Brain

I. From the Enlightenment to Neo-Rentier Economies

1. The Financial Sector’s Rise to Power

2. The Long Fight to Free Economies from Feudalism’s Rentier Legacy

3. The Critique and Defense of Economic Rent, from Locke to Mill

4. The All-Devouring “Miracle of Compound Interest”

5. How the 1% holds the 99% in Exponentially Deepening Debt

7. The Failed Attempt to Industrialize Banking

8. The Stock Market as a Predatory Arena

9. From the Stock Market’s Origins to Junk Bonding

10. Finance vs. Industry: Two Opposite Sides of the Balance Sheet

11. The Bubble Sequence: From Asset-Price Inflation to Debt Deflation

12. The Bankers Saw It Coming, but Economists averted their Eyes

13. The Bailout Coup of 2008: Saving Wall Street instead of the Economy

14. The Giveaways get More Deeply Politicized and Corrupt

15. Wall Street Pretends to Insure against the Crash

16. Bailing out of Goldman via AIG

18. From Democracy to Oligarchy

III. Austerity as a Privatization Grab

20. The Neoliberal Conquest of Post-Soviet Latvia

21. Creation of the Troika and its pro-Rentier Agenda

24. The Troika’s Road to Debt Serfdom

26. Financial Austerity or a Clean Slate?

IV. There Is An Alternative