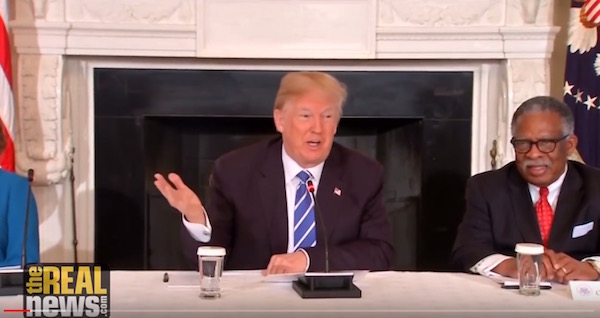 SHARMINI PERIES: It’s The Real News Network. I’m Sharmini Peries coming to you from Baltimore. President Trump presented his infrastructure plan on Monday. The long-awaited plan proposes to spend $200 billion in federal funds over the next 10 years. This is to be complemented with another 1.3 trillion in spending from cities, states, and private investors for a total of 1.5 trillion. Another major component of the plan is to reduce red tape and approval processes so that projects are approved much faster.

Here’s what Trump had to say in presenting the plan.

SHARMINI PERIES: Joining me now to analyze the infrastructure proposal is Michael Hudson. Michael is a distinguished research professor of economics at the University of Missouri-Kansas City. He’s the author of several books, the most recent among them is J is for Junk Economics. Welcome back, Michael.

SHARMINI PERIES: Michael, it sounds like you had your own infrastructure failure experience last night. Tell us about it.

MICHAEL HUDSON: I was coming back from Washington from a week at Democracy Collaborative on a $400 round trip on the Acela Express, which is supposed to be the elite Amtrak. We left Washington at 3:00. At 5:30, just before we got to New York, the train stopped. The conductor said, “We were told we can’t go any further, there is a track power outage, no trains are running in and out of Penn Station.” He suggested if anyone wanted to take the Jersey tubes across the station platform, they could do that. But there was no idea when things would be restored.

So, everybody waited about five minutes. Then about half the people got off and got into the New Jersey tube train standing shoulder the shoulder. But that wasn’t moving because they had an announcement there was no electricity going in and out of New York, you can’t get there. So, I shared an Uber cab with someone who was sitting next to me to get into Manhattan.

I may add that the trip was so jiggly that it was very hard to read or to write along the whole route. That means that the idea that somehow an infrastructure plan can develop a China-style, high-speed transit is just a fantasy. In order to have high-speed transit with anything really fast, you need a dedicated roadway. While I was in Washington, the Republicans, as you know, were going to their meeting down south, and their Amtrak train crashed into a garbage truck. You can imagine that a train track that goes through crossing gate crossings wouldn’t possibly work for high-speed rail.

Also, the cost would, I think, be closer to $20 trillion just to buy the land rights along the current railroad or other route, because the land is all built up in America. There’s a law of eminent domain and there have been so many lawsuits that it’s completely infeasible to rebuild the railroads.

SHARMINI PERIES: So, Michael, let’s go over some of the key points in the plan, which includes deregulation and the so-called private-public partnerships. And also, the private incentives that states and cities are supposed to offer in order to obtain matching funds. Let’s take up first the issue: deregulation. What effect will this have on communities?

MICHAEL HUDSON: Well, many states and localities have blocks to prevent privatization giveaways. They want to prevent what happened in Indiana with its toll road. They say, “Wait a minute. Privatization is going to be a giveaway. It’s going to triple the costs of providing infrastructure services. It’s going to price our cities and states out of the market if we go along with this plan.” Trump’s plan says that in order to qualify for public funding, states have to abolish its regulatory framework, environmental laws and restrictions on private funding.

What Trump basically said is that states and cities have to let themselves be robbed blind by the hedge funds and Wall Street. Just as the hedge funds robbed Chicago blind on the parking meters – getting a huge rate of return that probably will force Mayor Rahm out of office at the next election – local governments have to let privatizers come in and vastly increase their cost of living for the infrastructure they need.

This means that this so-called infrastructure plan would have the effect of destroying America’s competitiveness instead of contributing to it. It would vastly raise the price of the cost of living and doing business rather than making things easier for the population.

SHARMINI PERIES: Michael, the American Society of Civil Engineers agrees with you that this is inadequate in terms of funding, that the Trump plan is just not sufficient. In fact, it needs, they say, just to deal with the backlog a $4.6-trillion investment by 2025 and Trump’s plan doesn’t even come close. What do you make of this?

MICHAEL HUDSON: Well, to begin with, the way that Trump’s plan is to be financed would triple the cost of what the engineers say, to $22 trillion. The reason is that it’s a Thatcherite privatization scheme. Its economic philosophy reverses the last 150 years of public infrastructure in America. In fact, it’s the biggest attack on industrial capitalism in over 100 years.

America’s first professor of economics at the first business school – Simon Patten, at the University of Pennsylvania’s Wharton School – said that public infrastructure is a fourth factor of production. But it’s not like labor, land, and capital, because the role of public infrastructure is not to make a profit. It’s role is to provide public services that are basic for the economy’s living standards and capacity to produce, and to provide these at a subsidized rate. That’s how America got rich and came to dominate the world industrial economy: by publicly subsidizing its basic costs: Low-cost roads, and low-cost other infrastructure. The government bore these costs so that public infrastructure would subsidize the economy to lower the cost of doing business.

Trump’s plan would vastly increase this cost, because he forces its pricing into a highly financialized and debt-pyramided marketplace. Instead of offering roads at the cost of production, for instance, he’d actually triple their cost of production by insisting that it be privately financed, probably by hedge funds and bank credit that would add interest charges, capital gains charges, management fees and other overhead charges, not to mention the fines for financial fraud that goes with it. All this overhead would be factored into the prices that the new infrastructure would be required to charge its users.

Look at the Indiana Toll Road. That was done by a Trump-style private and public infrastructure. The tolls are so high – to try to pay off the hedge fund backers – a that people don’t use them. They choose to use the free, slower roads. That’s the sort of is a horror story that anyone who’s thinking of Trump’s plan should look at.

When Trump’s plan mentions water privatization, all you have to do is look at Thatcher’s water privatization in Britain. It has vastly increased the price of water. The water companies have been bought out by hedge funds, registered abroad by foreign owners who are opaque. It’s become probably the most unpopular privatization plan of all. So that part’s a disaster.

MICHAEL HUDSON: Value capture financing is a wonderful idea. It’s so wonderful, I don’t know how it got into the plan. It recognizes that if you build transportation along a route, like New York City’s Second Avenue Subway, that transportation is going to increase the value of land and real estate all along the route. People are going to have closer access to the subways, or to roads and railroads. Many Hollywood movies in the 1930s were all about the corruption involved in building roads up to politicians’ houses.

The guiding idea is that in the future, if New York City were to do something like building the Second Avenue Subway for $3 billion, that this would raise the rental value. It already has raised property valuations along the subway line by $6 billion, because people now don’t have to walk a mile to the overcrowded Lexington Subway.

Under Trump’s plan, in order to get federal funding, cities would have to help themselves by recapturing the real estate value created by this added transportation, instead of leaving the gains in the hands of the landlords. That was what happened with the Second Avenue Subway extension, and also the West Side extension to the Javits Center. This increased real estate values all along there. Rebuilding Wall Street’s luxurious subway station cost, another 3 billion.

This is the best idea of the plan, and the one thing that should be kept – which is, of course, why the Democrats don’t mention it at all. They’re backing the real estate and the financial interests. Rick Rybeck has written a wonderful article on this recently. There are a lot of followers of Henry George that love this aspect of the plan.

SHARMINI PERIES: All right, Michael, this is your opportunity to lay out a infrastructure plan that you think will work for this country.

MICHAEL HUDSON: The government would finance it, by creating its own credit in the same way that it created the $4.6 trillion to bail out the banks on Wall Street. Instead of creating money to give to Wall Street, you’d spend money into the economy to build up infrastructure. And ideally, you’d tax the rich for this. But now that Trump has untaxed the wealthy, the only way that you could possibly do it – under his tax giveaway to Wall Street – would be for the government simply to print the money. It would create the money as the Federal Reserve or the Treasure can easily do, and finance it all publicly to provide the basic infrastructure services at cost or freely. So, instead of tripling the cost of water, instead of tripling the cost of transportation, you’d actually reduce the cost of transportation, you’d reduce the cost of water, and you’d still get the value recapture tax. The basic idea is to make it less expensive for the economy to produce and to live.

SHARMINI PERIES: Michael, much of this country doesn’t believe that government is capable of doing this because they have been given example after example of how government bureaucratic structures aren’t working. And, of course, this deterioration of the civil service, it plays a big role in all of this. How do you rebuild confidence in the state structures?

MICHAEL HUDSON: You write a history of America’s success in doing this. You can look at Eisenhower’s road building plan of the 1950s, for instance. You can look at the whole history of America’s infrastructure spending and the whole logic that was spelled out by Simon Patten at the Wharton School and by the economic theorists of industrial capitalism when America was really taking off in the late 19th and early 20th century. The whole history of how America built its roads, how it built the communication system, public health are examples of how governments make things work.

You can look at Germany and other successful economies. You look at what went well, but you have to look at what went wrong to see how the financial interests can take over these plans, privatize them, and somehow gut them, making them predatory instead of productive.

SHARMINI PERIES: All right, Michael. As always, great pleasure to have you on and thank you for joining us.

MICHAEL HUDSON: Thank you. It’s good to be here, Sharmini.

SHARMINI PERIES: And thank you for joining us here on The Real News Network.