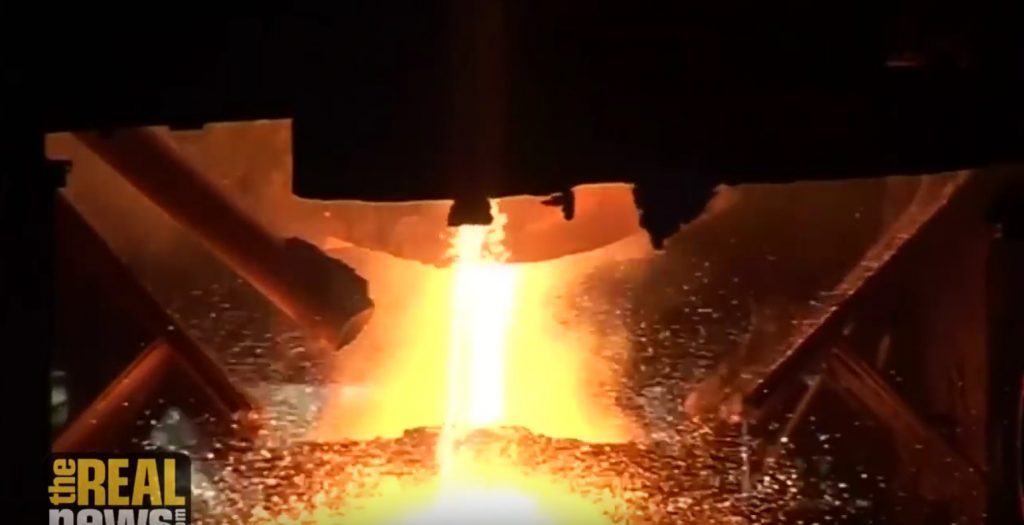 Trump’s Tariff Travesty Will Not Re-Industrialize the US, TRNN, March 15, 2018

SHARMINI PERIES: It’s The Real News Network. I’m Sharmini Peries coming to you from Baltimore. The Organization for Economic Cooperation and Development, or known as the OECD, predicted on Tuesday that Trump’s tariffs on aluminum and steel imports could initiate a wave of protectionism and slow global economic growth. The tariffs have already spurred various countries to announce retaliatory measures. For example, the European Union plans to impose tariffs on Harley Davidsons and blue jeans. China has also promised to retaliate. Meanwhile, US companies that use steel and aluminum as raw materials for their production processes already report significant cost increases by as much as 40%.

Joining me now to analyze Trump’s tariffs is Michael Hudson. Michael is a distinguished research professor of economics at the University of Missouri Kansas City. He’s the author of several books, the most recent among them is J is for Junk Economics. Michael, welcome back.

SHARMINI PERIES: Michael, what do you think of Trump’s tariffs on aluminum and steel, will they protect US manufacturing industries?

We’re still in a Thatcherite economic policy, so I think what Trump really wants to do is use diplomatic leverage and economic threats against Canada and Mexico. I think what is on his mind is “We’ll let Mexico’s steel in, but it’ll have to build the wall and pay for it. If it doesn’t do that, then we’re going to punish it. For Canada, you’re going to have to surrender to all of our renegotiated NAFTA demands. You have to buy more American cars. You have to do whatever we tell you to, otherwise we’re going to create unemployment in your steel industry.”

His policy is what we call an internal contradiction that doesn’t make sense. Canada has already announced that it is not going to renegotiate NAFTA and let the tariff be used as a threat. The Canadians are getting fed up with American pushing special interest favoritism against it. The Mexican president refused to come up a few weeks ago when it was obvious that Trump was going to make demands on Mexico that were so much against its national interest that they just canceled.

SHARMINI PERIES: So then why is US manufacturing, steel manufacturing in particular, predicting a 40% increase in prices?

SHARMINI PERIES: Michael, historically tariffs and protectionist policies have been used by countries as a strategy to industrialize. Can this strategy work again in light of the fact that US has been de-industrializing for several decades now?

MICHAEL HUDSON: It can’t work again, for a number of reasons. For one thing, from the very beginning of the 19th century, ever since Henry Clay put forth the American System in the 1840s of internal improvements, protective tariffs, and a national bank and financial policy to fund an industry, those three had to go together. In order to make industry competitive, you need not only tariffs to block imports, you need to support manufacturing by infrastructure investment, roads, canals, alongside an educational system.

By the end of the 19th century, you had the Conservative Party in Britain, Benjamin Disraeli, saying “Health is everything. We have to have a health policy to promote our workforce.” In Germany, Bismarck said “We need a pension system. We need an industrial banking system to fund Germany. We need government spending on infrastructure, on railroads.” You had European, French, German and English investment in public spending.

In fact, what Trump is saying is that he wants this to be the first salvo in a trade war against the whole world that has a mixed economy. He’s announced pretty much that within the World Trade Organization he’s going to promote blockages against any country where the government plays a role. For instance, if they tax companies that pollute with a pollution tax, any government that regulates, any government that provides subsidized services like subsidized education, subsidized healthcare, subsidized roads and railroads, this is somehow not a free market economy.
A free market economy is an austere economy sort of like Thatcherism. This aim is to dismantle industry, and Trump is essentially saying “Any economy that has an industrial strategy, we’re going to exclude from the American-centered way of reorganizing society.” Basically, this means that either you’re going to join the neoliberal Thatcherite block, or the rest of the world is going to be a state socialist or other socialist, or just plain mixed economy block.

But no other country outside of the neoliberal countries is going to say “Okay. We’re going to privatize our education just like America’s doing. We’re not going to give free education or subsidized roads. We’re not going to regulate industrial monopolies.” No country is going to go along with this attempt to essentially declare war on countries that are not “free enterprise economies,” meaning financialized economies.

SHARMINI PERIES: Michael, legally, trade policies are supposed to be coordinated through Congress. However, Trump is sidelining Congress and saying that he has the right to negotiate and to do his wheeling and dealing from The White House. We just saw a recent decision where he’s denied the $177 billion Broadcom takeover of Qualcomm that he considers a national security threat. We don’t know whether it is or not but let’s take it for granted that it is. This kind of wheeling and dealing and sidelining Congress, does that concern you?

MICHAEL HUDSON: Yes, for two reasons. Number one, it’s the imperial presidency. It’s an attack on the American Constitution. You’re right, Congress is supposed to be in charge of trade policy, just as it’s supposed to be in charge of declaring war, but the president can say that there’s a national security emergency. The problem with this is that ever since the World Trade Organization was created anew in the 1990s, no country, not even the United States, has used the national security excuse to impose tariffs. George W. Bush thought about it, but then he was told that there was no persuasive basis for it.

But what’s most interesting in the Qualcomm case is the logic for national security. What Trump and the government said was that the problem of letting Singapore take over Qualcomm is they’re financial people, and finance lives in the short-run. The official Committee on Foreign Investment in the United States (CFIUS) letter says (quote):

“Broadcom has lined up $106 billion of debt financing to support the Qualcomm acquisition, which would be the largest corporate acquisition loan on record. This debt load could increase pressure for short-term profitability, potentially to the detriment of longer-term investments. The volume of recent acquisitions by Broadcom has increased the company’s profits and market capitalization, but these acquisitions have been followed by reductions in R&D investment.”

In other words, if we let a financially organized company take over a technology, they’re going to cut back research and development to bleed the company and extract dividends. That’s what finance is all about. That’s how private equity funds operate. That’s the Wall Street modus operandi. So what Trump has said is that the way in which Wall Street behaves, the way in which the banking system behaves, is against national security.

This is a wonderful argument that I think is worth following up. The main violator of national security in this case would be financializing the economy, Wall Street. It would be the hedge funds and private equity that are backing Trump. At the same time, you have the Republican congress working with the Blue Dogs in the Democratic Party to dismantle bank regulation, deregulate the banks, and essentially make it easier to oppose national security, whose time frame is supposed to be long term.

Privatization aims at raising the price and extracting a monopoly rent from infrastructure. So in a way, Trump has just said “The policy that I and the Republicans are promoting violates every condition of national security in the United States, and we’re not going to let Singapore do that either. But we’re only going to block Singapore from doing it, because it’s Singapore and they’re Asians, not Wall Street.” That’s my translation of his policy.

SHARMINI PERIES: All right, Michael. I thank you for joining us today and looking forward to having you back very soon because I think these trade policies are rather interesting in terms of what’s being negotiated, and soon we may actually hear some sort of response on the part of China to these new tariffs. We haven’t had an official response from them but we’ll look out for it, and we’d like to have you back then. Thank you so much.

MICHAEL HUDSON: Thank you, good to be here.

SHARMINI PERIES: And thank you for joining us here on The Real News Network.